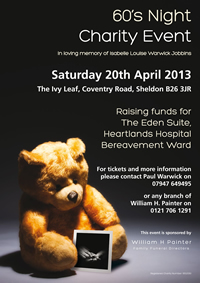 On Saturday 20th April 2013, William H. Painter Funeral Directors sponsored a 60’s Evening, at the local Ivy Club in Sheldon. The evening was in memory of Isabelle Louise Warwick-Jobbins, and all proceeds from the evening were going to support the Eden Suite, at Heartlands Hospital. which supports families who have lost children during pregnancy.

The evening provided music by Krys 60’s tribute band, and also featured a large raffle, and auction with prizes provided by local business, and the general public. The evening was a huge success, with over 300 people including clients, Hospital staff from the Eden Suite, ministers, and friends in attendance.

To date with other fundraising that has been going on over £5000.00 has been raised for the Eden Suite, and the parents of Isabelle Hayley, and Lee, along with sister Meah, and the Eden Suite staff, have been extremely gratefully with the support of William H. Painter.